From North to South, the beaches of Mar Menor belong to the municipalities of San Pedro del Pinatar (towns of Lo Pagßn and Los Cuarteros), San Javier (Santiago de la Ribera), Los Alcßzares and Cartagena (El Carmoli, Los Urrutias, Los Nietos, Islas Menores, Mar de Cristal, Playa ParaÝso). To the South there are five islands of volcanic origin: 3 are the so-called islas mayores (large islands): Perdiguera, Mayor or Barˇn and Ciervo; and are 2 smaller islands: Redonda or Rondella and Sujeto.
This is the largest salt-water lagoon in Europe, with 22 beaches in four municipalities; seven of those beaches and two marinas received the blue flag award in 2018. It has protected areas of an important environmental value: Hita beach and the islands of Perdiguera, Barˇn and Grossa. Furthermore, `Camina 10.000 pasos' in La Manga was declared a Blue Trail. Furthermore, 20 beaches in Mar Menor received the 'Q' quality award, granted by the Tourist Quality Institute (ICTE).
The municipality of San Javier is home to the Spanish Air Force Academy and the international airport of San Javier.
Its twelve golf courses, mild weather and good communications, where the international airport stands out, make Mar Menor an excellent golf destination for tourists.
Mar Menor has ten marinas for nautical sports, with 3,853 moorings points.
Within the framework of the strategy for promotion of tourism, San Javier has established itself as the first town in the Region of Murcia to obtain the 'tourist municipality' distinction, an initiative of the Region of Murcia Government included in the regional tourism covenant developed jointly with the city halls.

Considering the dispersion of Mar Menor, the municipality of San Javier is taken as a reference, more specifically its urban area. The A-7 freeway (Mediterranean Freeway) runs through the municipality, whereas the A-30 freeway (Cartagena-Murcia-Madrid) is only 22 minutes away.

Due to above-mentioned characteristics it is difficult to determine the distance to the closest airports, but roughly speaking it is 30 minutes to the International Airport of Murcia in Corvera). 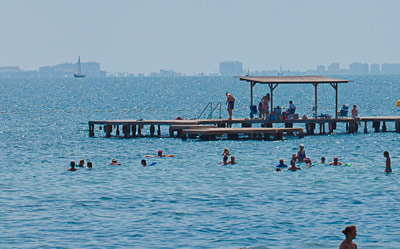 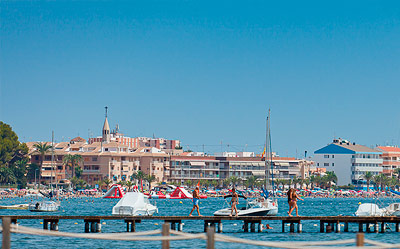