Cartagena is the second largest municipality in the Region, with a population of 214,177. The Cartagena municipality is known for its diverse nature, despite its many centuries of intense mining, industrial and tourist activity.
Tourism is a key contributor to the city's wealth, with cruise ships and many tourists visiting its coastline during the summer months.
La Manga del Mar Menor, with a diversified hotel portfolio, is considered the main tourist destination in the Region. Due to its geophysical and sociocultural characteristics, La Manga has established itself as a favorite choice for large sports and nautical events. Cartagena was awarded 6 blue flags in 2018 (5 to its beaches and 1 to the city's Royal Yatch Club). Furthermore, 'Camina 10.000 pasos' in La Manga and 'De Iglesia a Iglesia' in Cartagena, were declared Blue Trails.
As for the Q mark of quality, this municipality received more awards (12 flags) than any other from the Spanish Tourist Quality Institute in 2016, 7 of which were maintained in 2017 for the reasons abovementioned, and are expected to increase next year.
The city's history makes up its tourist offer thanks to the preservation and reconstruction of its heritage, including the Roman Theater ad Old Santa MarĒa Cathedral, in addition to many archaeological sites, such as the Roman Coliseum. Cartagena also has a Congress Center (El Batel), an avant-garde building located in the port with 10 rooms and a capacity for 3,000 people.

Cartagena-Madrid, via Albacete
Cartagena-Barcelona, via Valencia
Cartagena is included in the high speed train line between Madrid and the Spanish Mediterranean Coast

The closest airport is the International Airport of the Region of Murcia (Corvera), 33 Km. 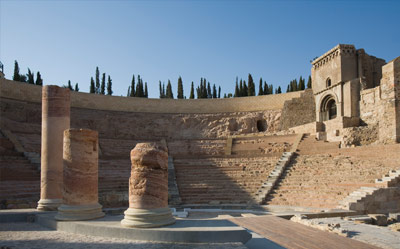