La Manga del Mar Menor, important tourist town sitting on a coastal destination in the Region of Murcia, was urbanized in the second half of the 20th century.
La Manga belongs to the municipalities of Cartagena (South side) and San Javier (North side), which created a consortium to manage it.
The coastline of La Manga is basically a neck of land stretching from Cabo de Palos to the boundary of the Salinas y Arenales natural park in San Pedro del Pinatar. With a width ranging between 100 and 1200 meters, it separates the Mediterranean Sea and Mar Menor. La Manga has 13 beaches on the Mar Menor shores and 17 on the Mediterranean shores, in addition to 5 islands in Mar Menor and 3 in the Med. A total of 11 of these beaches were awarded the blue flag in 2016.
La Manga del Mar Menor, with a diversified hotel portfolio, is considered the main tourist destination in the Region of Murcia. Due to its geophysical and sociocultural characteristics, La Manga has established itself as a favorite choice for large sports and nautical events.
In this area, the Tomas Maestre Marina, in the North side of La Manga (Mar Menor shores), is also worth mentioning. The marina can be accessed via the Mediterranean by a navegable channel, the only one suitable for sea traffic between the Med and Mar Menor.

The closest airport is the International Airport of the Region of Murcia (Corvera), 59 Km. 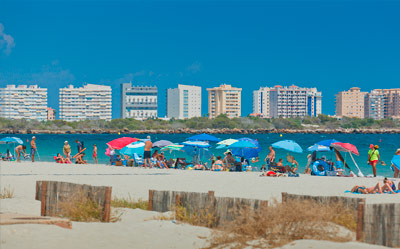 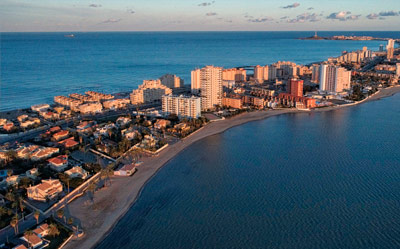