The municipality of Mazarrˇn neighbors the municipalities of Cartagena and Fuente ┴lamo to the East; Alhama de Murcia and Totana to the North; Lorca to the West and the Mediterranean Sea to the South. The municipality, with a rather rugged landscape, has beaches, cliffs and small coves comprising a unique enclave in the Spanish Mediterranean as it remains nearly unspoiled.
Eight of its 32 beaches, and two of its marinas, received the 2018 blue flag award. Furthermore, six Mazarrˇn beaches received the `Q' quality award, granted by the Tourist Quality Institute (ICTE).
One of the main appeals of Mazarrˇn not to be missed out by tourists is the Enchanted Landscape of Bolnuevo, where the force of wind and water has eroded the mountain and given rise to whimsical rock formations near the seafront.
Another appeal is the Mazarrˇn Phoenician Ship Interpretation Center, where visitors can learn about the municipality's history through important archaeological remains and the replica of this old ship.

AP-7 E-15 (Mediterranean toll freeway), to AlmerÝa and Alicante. Regional RM-3 freeway to Totana, where it connects to the A-7/E-15 freeway. In addition to the road network, the municipality has a port in the town of Puerto de Mazarrˇn.

The closest airport to this coastal town is the International Airport of the Region of Murcia (Corvera), 43 km. 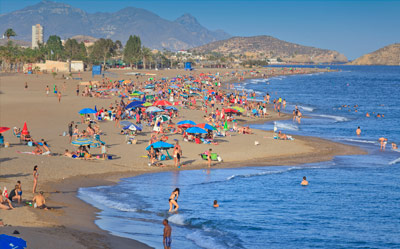 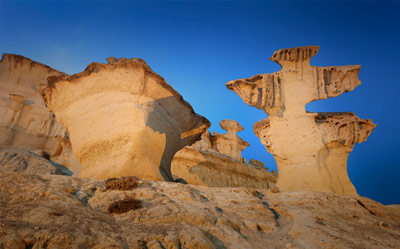